This is my latest coffee mill acquisition. I got it at an auction yesterday.

It is a Lane Brothers "Smokestack" Swift Coffee Mill No. 16.

The Swift Mill Lane Brothers Poughkeepsie N. Y. is stamped on each wheel. The wheels measure 23" and the overall height of the coffee mill is 37"

There is no patent date but this intricate wheel design was not in use until 1878 when the company set up shop in Poughkeepsie. The Lane Brothers started in 1808 in Harts Village, Millbrook New York. 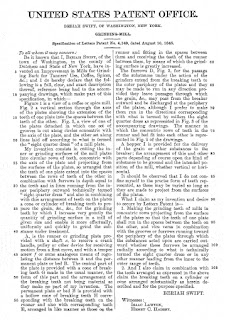 Their first patent was registered in August 1845 when Beriah Swift built a factory to manufacture mills based on this patent. The Lane brothers, William And John, were cousins of Beriah Swift and they joined forces. The company was then called Swift and Lane Brothers. John Lane married Ann Swift the daughter of Beriah, further cementing the family business.

Some time between 1878 and 1882 the company moved to Poughkeepsie. Their coffee mills were in production up to 1920. 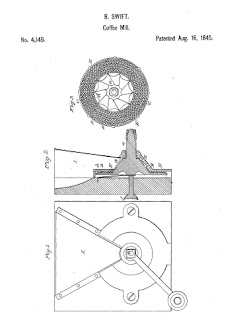 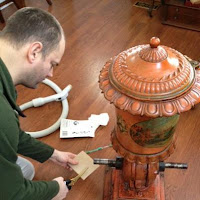 Hubs took it apart and cleaned it all up, then oiled it with Olive Oil. You  can't rub at the graphics or they disappear!

Next he managed to rotate the hopper so the graphics were properly lined up with a big one at the front and the back. They were off-center as you can see in this photo.


Both graphics are pastoral scenes. This picture is in better condition than the second one.

For now I've placed this coffee grinder (mill) with three of my other larger ones but it's only temporary while I think about where best to display it. These larger grinders are not normally here, they are scattered in various rooms in our house

Posted by Olive Tree Genealogy at 7:04 AM