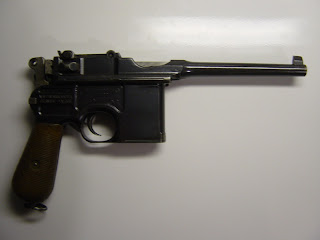 Well this is a little bit different than the kind of antiques normally found on this website but guns are one of the most popular antique collectibles.

Production of the C96 Mauser began in 1896, and ended about 1939 with over one million C96 pistols produced. Mauser named it the C96 the "Mauser Military Pistol" in the hopes that it would achieve large military sales. While limited numbers of the C96 pistol were purchased for issue to members of the German armed forces and police, sales were never what Mauser had hoped for.

On a interesting side note the laser blaster used by Han Solo in the film Star Wars was a Mauser with a few plastic bits stuck on it.
Posted by Olive Tree Genealogy at 9:25 AM