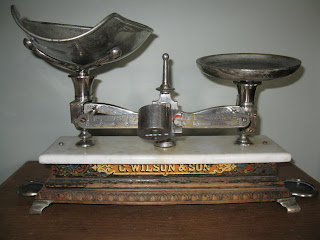 We bid on and won quite a few scales. One was this C WILSON & SON scale from Toronto Ontario.
Found a reference in Sessional Papers Canada Parliament #15; Report of the Minister of Agriculture 1902
Excerpt on p. 186: C. Wilson & Son, 67 Esplanade St. East Toronto Ontario - Silver Medal Diploma
Excerpt on p. 200, reporting on the Paris Universal Exhibition of 1900.


"C. Wilson & Son, of Toronto, were equally successful in obtaining a silver medal for their full collection of fine scales, from the smallest confectionery to the 1,000 lbs. platform scale. These scales, which indicate price and weights, were regarded with much interest by visitors who had no previous knowledge of the system".
Found in History of Toronto and Co. of York, Ontario: 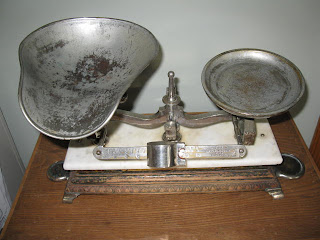 "C. Wilson & Co. Toronto Scale Works, 45 Epslanade [City of Toronto] This is one of the oldest businesses of the kind in the Dominion, having been established in 1851. Employment is given to 25 men and 8 travellers. Mr. C. Wilson was born in Co. Armagh Ireland in 1818 and settled in Ottawa in 1840, obtaining a position in the department of the Surveyor-General. He came to Toronto in 1849"

Posted by Olive Tree Genealogy at 6:05 AM