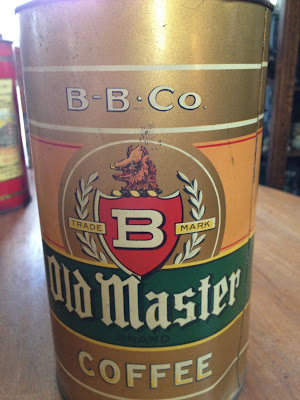 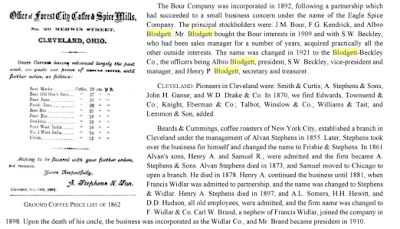 Toledo. The pioneer roasting firms here seem to have been: Warren & Bedwell; and JB Baldy & Co. Later, after 1876, we find the Bour Company, and the Woolson Spice Co.

The Bour Company was incorporated in 1892, following a partnership which had succeeded to a small business concern under the name of the Eagle Spice Company.

The principal stockholders were: J. M. Bour, F. G. Kendrick, and Albro Blodgett. Mr. Blodgett bought the Bour interests in 1909 and with S. W. Beckley, who had been sales manager for a number of years, acquired practically all the other outside interests.

The name was changed in 1921 to the Blodgett-Beckley Co., the officers being Albro Blodgett, president, S. W. Beckley, vice-president and manager, and Henry P. Blodgett, secretary and treasurer.

Posted by Olive Tree Genealogy at 5:57 AM