This is a very nice cabinet card of F. A. Pratt, a Civil War soldier. It is a  copy of an earlier 1862 Cartes de Visite.

The man is Captain F. A. [Franklin Amos] Pratt. He was born in Connecticut circa 1836 and was in Battery M, 1st Connecticut Artillery during the Civil War.

He is found in the 1880 census for the city of St. Louis Missouri and this cabinet card was done in St. Louis in 1890.

In 1870 he was in Hartford Connecticut.

Item #31 For Sale: $95.00 plus shipping. Contact us at antiquehunterblogATgmail.com for shipping costs

My research indicates he is almost certainly the Franklin Amos Pratt born in Waterbury, New Haven, Connecticut in 1836 to Francis and Emiline Pratt. He is found with his parents and siblings in the 1850 census for Waterbury. By 1900 he was in Montana and is buried in Mountain View Cemetery, Livingston, Park County, Montana

His Civil War history is as follows:

HDQRS. SECOND VOL. BRIGADE ARTILLERY RESERVE,
November 17, 1863.
CAPTAIN: I have the honor to make the following report of the part taken by the several batteries composing the Second Volunteer Brigade, Artillery Reserve, in the late action:
In compliance with order received from headquarters Artillery Reserve, November 6, 1863, Battery M, First Connecticut Artillery, Captain F. A. Pratt, marched from the camp of the Artillery Reserve, near Catlett's Station, at 4 a. m. of the 7th instant, and reported at General French's headquarters near Germantown, and proceed thence to Kelly's Ford, where it took position, and soon afterward opened fire on the enemy, with good effect, as will be seen by the report of Captain Pratt, a copy of which is hereunto attached.

[Source: The War of the Rebellion: A Compilation of the Official Records of the Union and Confederate Armies]

Numbers 16. Report of Captain Franklin A. Pratt, Battery M, First Connecticut Heavy Artillery, of action at Kelly's Ford.
KELLY'S FORD, VA., November 12, 1863.
SIR: I have the honor to make the following report of the part taken by my battery in the action of the 7th instant at Kelly's Ford:
In compliance with orders from headquarters Army of the Potomac, the battery moved from the camp of the Artillery Reserve, near Catlett's Station, at 4 a. m. of the 7th instant, reporting at the headquarters of General French, near Germantown, at daybreak, from which place it moved at the rear of the First Division, Third
Corps, by way of Morrisville, to Mount Holly Church. When near the latter place I was ordered to move at once to a position on the road about 500 yards to the left of the church, and 1,500 yards from Kelly's Ford, which it commanded with the plains beyond. As I came up there was a scattering musketry fire at the ford, and the enemy were throwing forward infantry from the woods into the rifle-pits and buildings on the opposite bank. Being directed by General Birney to "open on them as soon as possible," the battery was soon in position, and the second to open fire.
The enemy being under cover, General Birney directed me to fire on the brick store in which their riflemen were sheltered. My first shot struck the building between the second-story windows, passed through the roof of the one intended. My fire was then directed at a battery of brass pieces the enemy were using on our infantry from the edge of the woods, distant from me about 2,500 yards. They effected, the enemy advanced a line of infantry from the edge of the woods to oppose the advance of our forces. I threw three shells at them that apparently struck their line, which broke in much confusion, so much of it as was not covered by rising ground.
The ammunition used was Schenkle percussion shell. I expended but 15 rounds, but its effectiveness was very evident. They carried with great precision, few failing to explode.
In closing the report I have to express my belief that the merit of the 4 1\2-inch rifle for field service is not properly considered, and that if more generally into action, they would add much good to the result.
Very respectfully, your obedient servant,
F. A. PRATT,
Captain, First Regiment Conn. Arty., Commanding Siege Battery M.
P. S. JASTRAM, 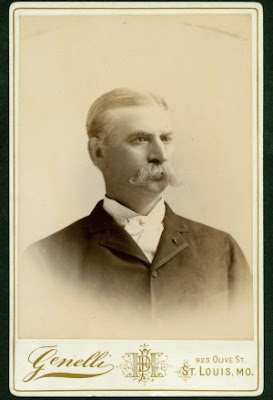 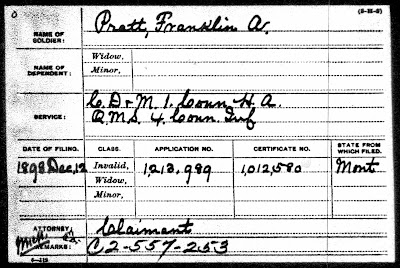 In 1898 Franklin filed for his Civil War pension in Montana

Source: Ancestry.com
Posted by Olive Tree Genealogy at 8:38 AM