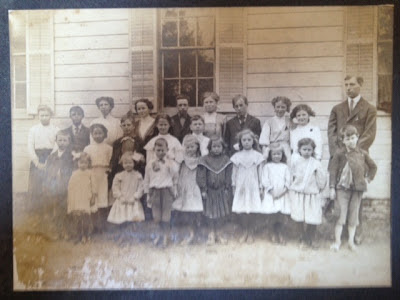 In my collection of 19th century and early 20th century photos is an orphaned 9x7 inch photograph of students and teacher at Huntersland School, Schoharie County New York. 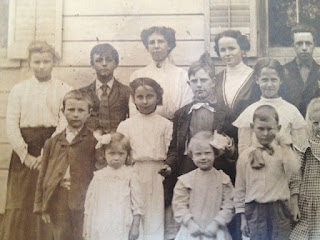 The names of students were written on the back and while it was not dated, we can study the photo for clues. We can also check census records for the names of the students (a much easier task than using clothing and hairstyles for clues)

Also the photographer is stamped on the reverse: P. J. Messer so we should be able to determine when he or she was in business. 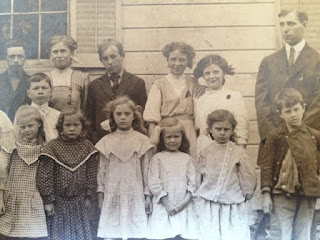 Census records on Ancestry indicate that Stanley (the teacher) and Minnie Heason were the children of George & Isadora Heason and lived in Middleburgh New York. Stanley was born ca 1890 and Minnie ca 1901. Minnie looks to be about 12 years old in the photograph, giving us an estimated year when it was taken of circa 1913.

Next I found Manard Laraway born in 1905 living in Middleburgh. He looks to be about 10 years old in the photo so that would give an estimated year of 1915 for the photo

Clothing is a mixture of periods and I suspect that may be due to a number of reasons - some children may not have had current fashions to wear. Older students, girls especially, might have known it was picture day and parents may have suggested they wear mom's best Sunday dress or skirt and blouse. This would put those girls in earlier fashions. Some children could be wearing older siblings hand-me-downs.

However we can look at one distinctive feature - the V-necked yoke worn by three of the younger girls, then do some research to find out when this style came into fashion. That would allow us to determine an earliest date when the photo was taken.

We should also note the below-the-knee knickers that the young boys in the front row are wearing. One also looks to be holding a newsboy style cap. This helps confirm an estimated timeline for the photograph of 1910-1915.

Item #30 For sale: $20.00 + shipping (we need your zip or postal code to determine shipping costs)
Posted by Olive Tree Genealogy at 6:55 AM

is this still for sale?

HAVE YOU FOUND THAT PHOTO YET?LOL SORRY TO BE A BUG

I wish I could find it!! It is here somewhere.... It must have been accidentally put in the wrong archival box. I have not given up :-)